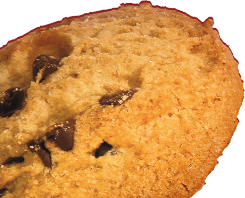 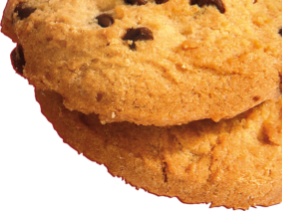 By continuing to browse this site, you accept the use of cookies to guarantee you the best possible browsing, to compile statistics and to allow content to be shared on social networks.

These cookies are strictly necessary for the operation of the site, you can disable them by changing the settings of your browser but you will not be able to use the site normally.

These cookies provide necessary information to applications of the website itself or integrated by third parties, if you disable them you may find some problems in the operation of the page.

These cookies are used to analyze the traffic and behavior of customers on the site, help us understand and understand how you interact with the site in order to improve performance.

These cookies can be from the site itself or from third parties, they help us to create a profile of your interests and to offer you advertising aimed at your preferences and interests.

You can delete cookies by modifying the browser settings as follows:

ONCE UPON A TIME

A saga of Passionate Pâtissiers

We're proud to keep 5 generations of the family legacy alive.
We jam-pack our biscuits with love and care every day with one thing in mind: quality. 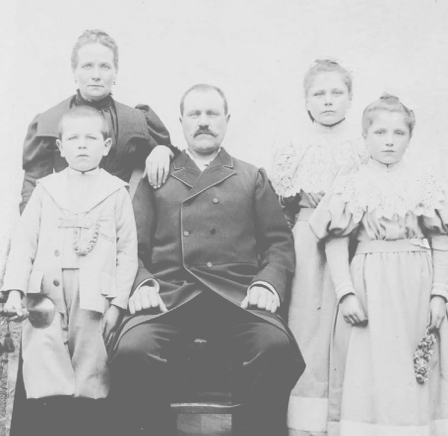 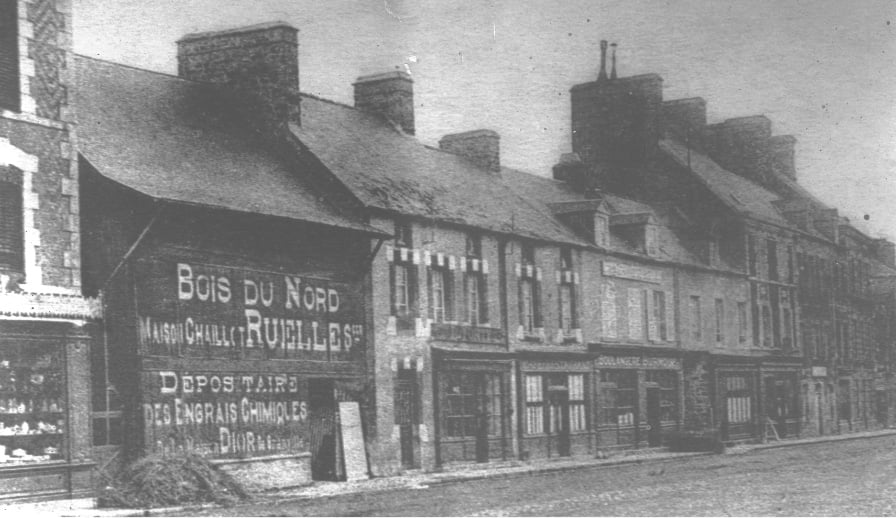 Great-great-grandfather Paul Burnouf opened his bakery in La-Haye-du-Puits. He started out as a miller so he used his in-depth knowledge of grains to create countless recipes, including the famous Sunday brioche we still make today.

Maxime, Paul Burnouf's son, took over the family business during the interwar period and became well-respected

for concocting lots of pastries and cakes, a rare thing in early 20th century bakeries, as well as a range of biscuits that his customers of all ages loved. Every day he'd make his horse and cart deliveries to some shops in the canton that sold his goods and made him even more famous. 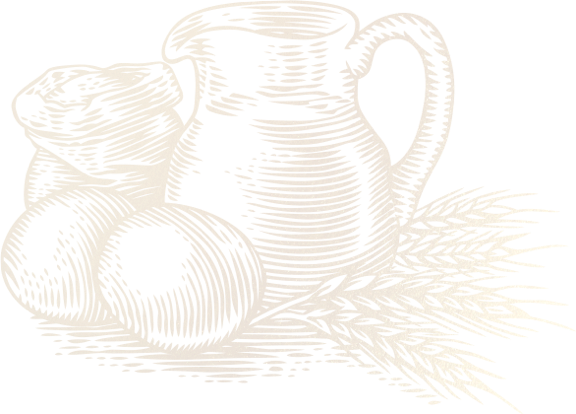 In 1940, war broke out before Grandpa Maxime (junior) could take over the family business. He was made a prisoner of war and couldn't stop the work of two generations being left in tatters.

He had nothing left when he was released. But with his common sense and a little luck, he managed to get the business back on its feet. Maxime soon became renowned for the Amandines, Little Cakes and Lady's Fingers that he delivered to groceries by bike: La Biscuiterie du Cotentin was born.

A sense of freedom swept through France in the late 60s and Marc, Maxime's son, went to earn his stripes at a bakery in Flers. But an urgent matter saw him return to the small family biscuit-makers: "Your father is seriously ill, everything's been put to a stop and we have to pay the suppliers.".

Marc decided to take the helm of the small factory. The 19 year old's youthful enthusiasm turned La Biscuiterie du Cotentin into a thriving company in a matter of years.

Over 20 years later, with a majority partner who had very different ideas to his vision and his wonderful trade, Marc decided to leave the family business with a heavy heart in the late 80s. 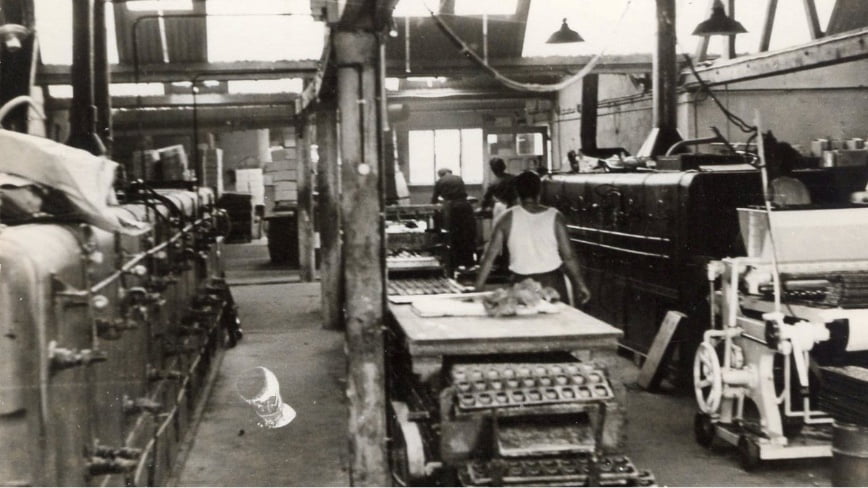 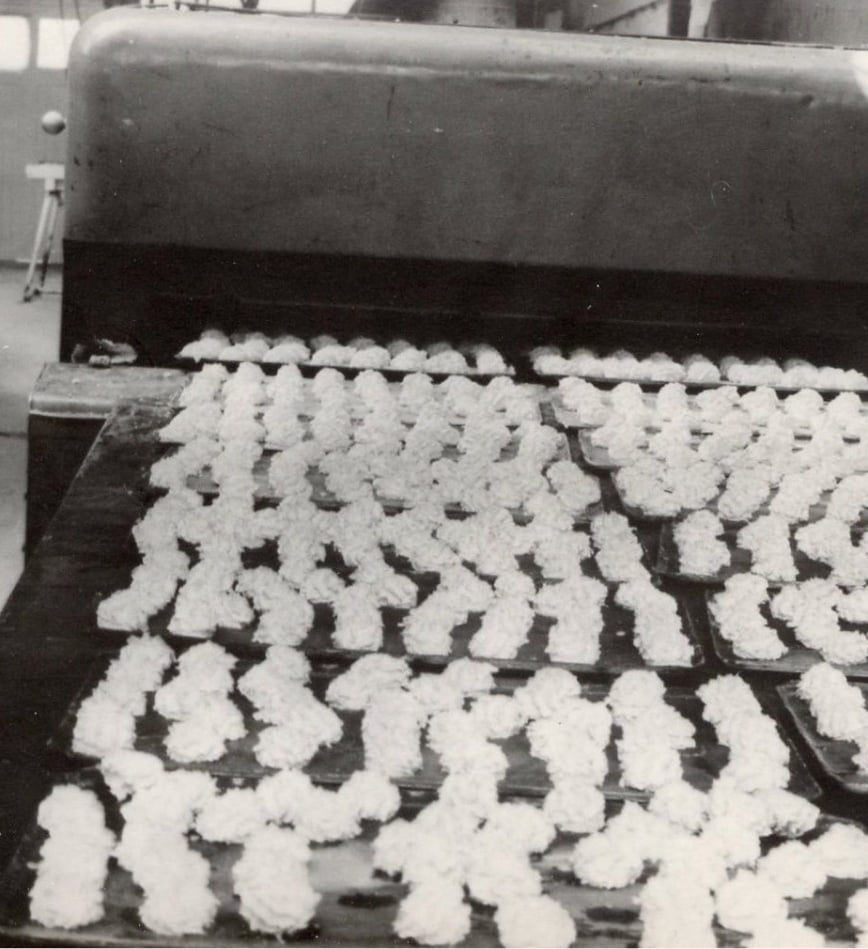 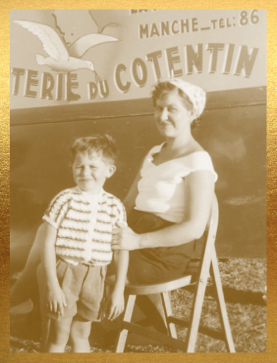 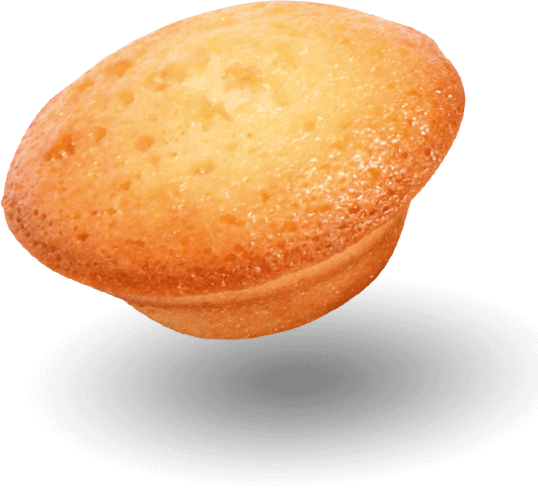 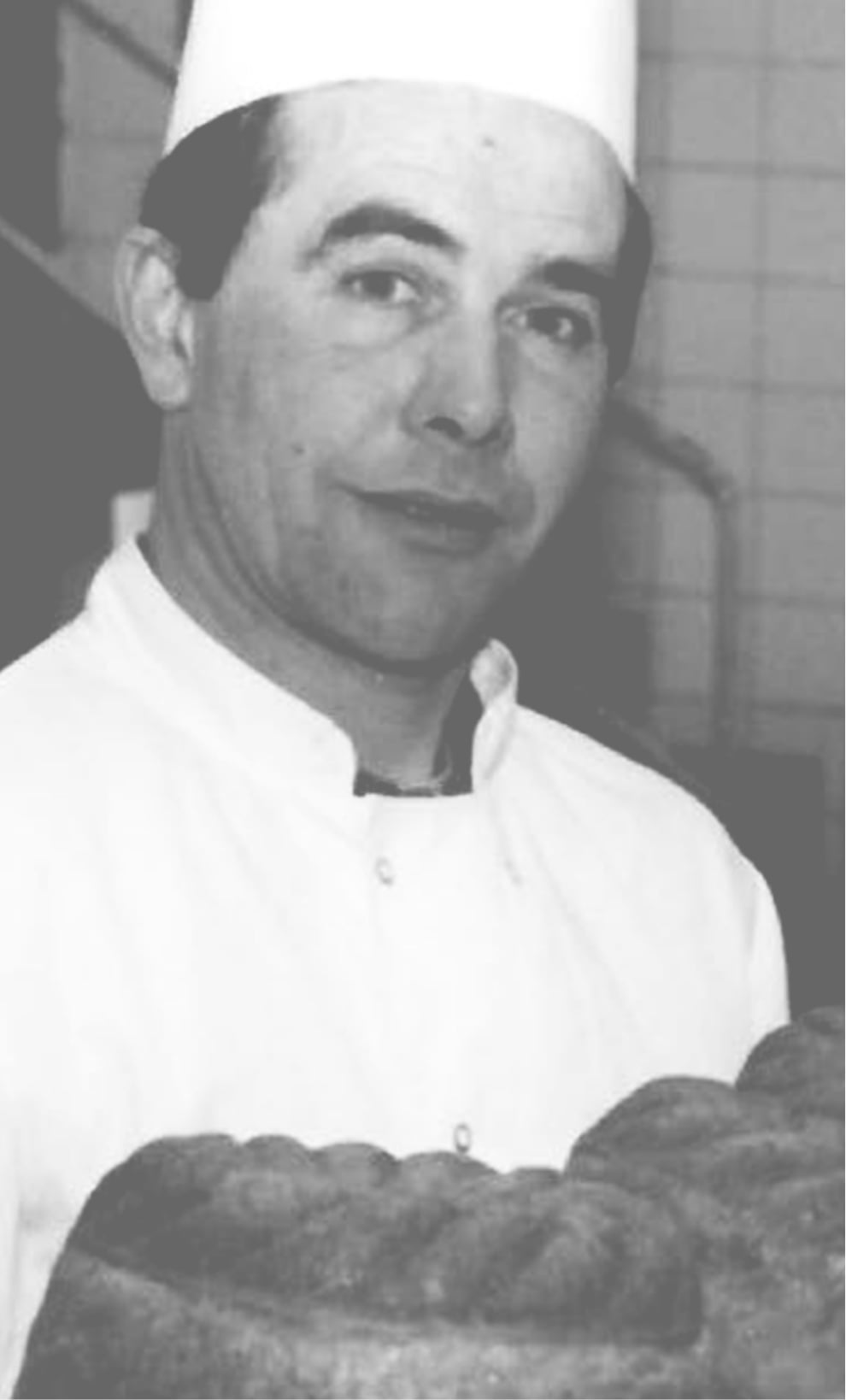 Marc started from scratch in 1990. He and his wife Carole founded La Maison du Biscuit with simple values: quality, fresh produce sold direct to customers.
A few years later, given the roaring success of their biscuits sold daily on the region's markets, Marc and Carole decided it was time to move out of their tiny factory in Saint-Sauveur-le-Vicomte. They set up shop in Sortosville-en-Beaumont, in an abandoned dairy that they got for the price of an old barn!

(a lovely little sea resort on the Cotentin west coast). 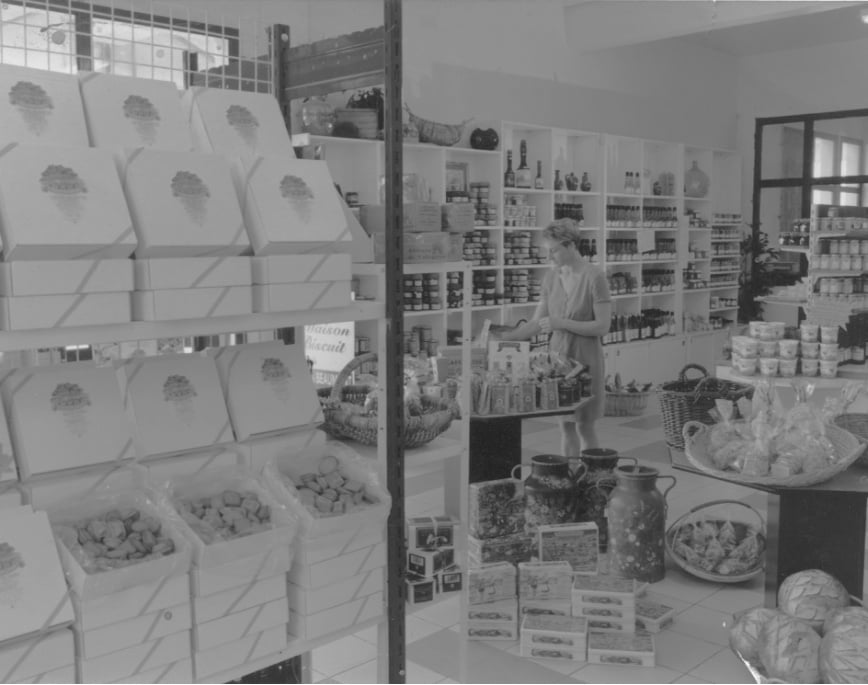 Marc stumbled upon an old photo of Paul's bakery in 1997. He and his childhood friend, Alain Tardif, started to explore recreating the old bakery in the shop: Too expensive!

But they hadn't counted on the inventive genius of Michel Durel, who worked at the factory. His baking skills weren't up to par but he made up for them in carpentry, what he originally trained in!
Alain spent 15 years hunting, designing and having Michel make a whole host of displays and shelves that have become La Maison du Biscuit's unique signature. 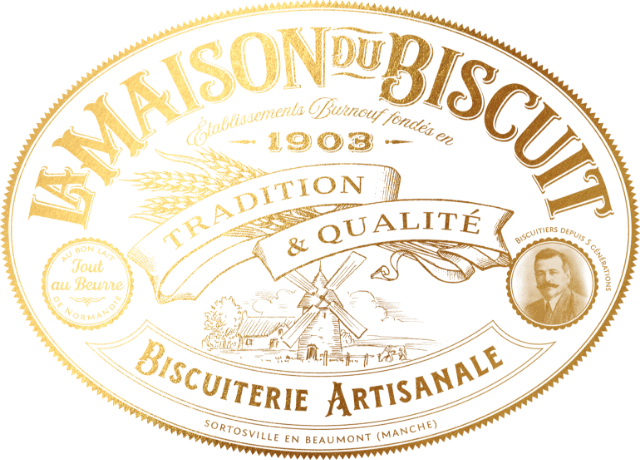 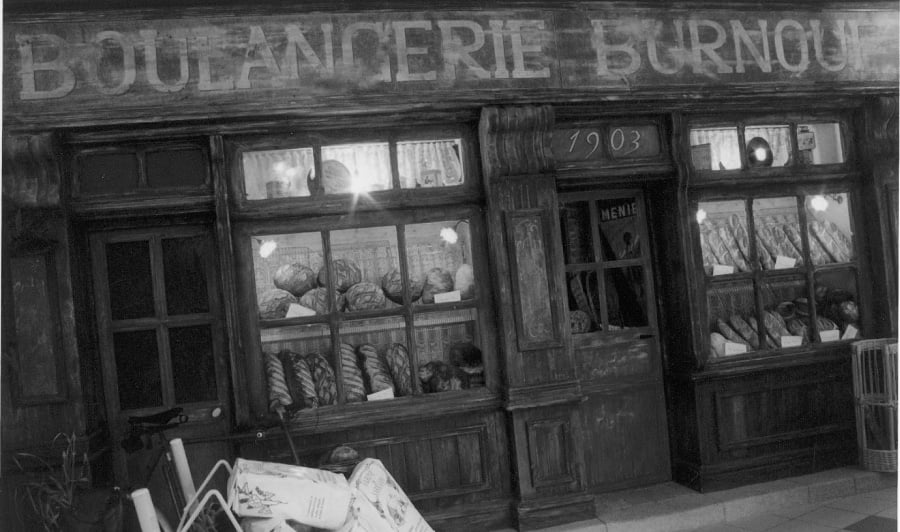 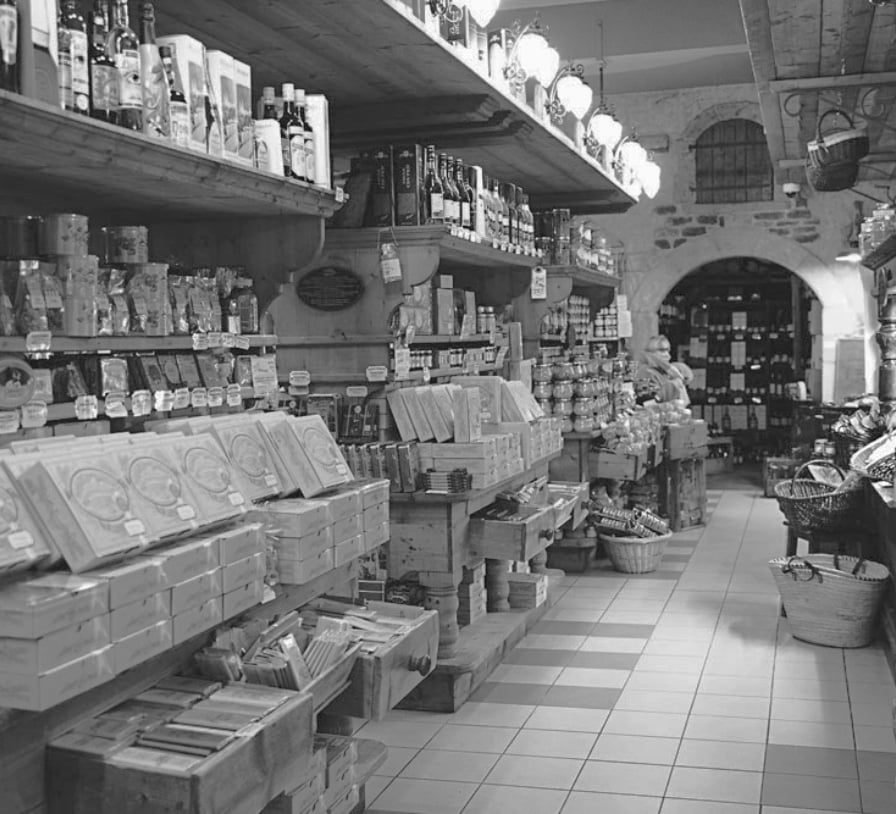 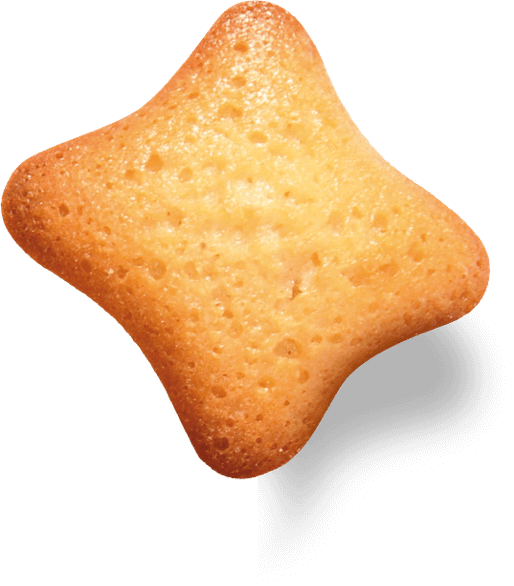 Given the relentless roaring success of the shop, in 2010 the Burnouf family, alongside Kévin (the 5th generation who had caught the family's biscuit bug), realised the shop was now too cramped.

Michel the carpenter had retired. So Alain Tardif, the loyal friend full of ideas, suggested bringing top artisans on board to create a completely utopic project drawn on the corner of a tablecloth: the Rue des docteurs Burnouf was born. 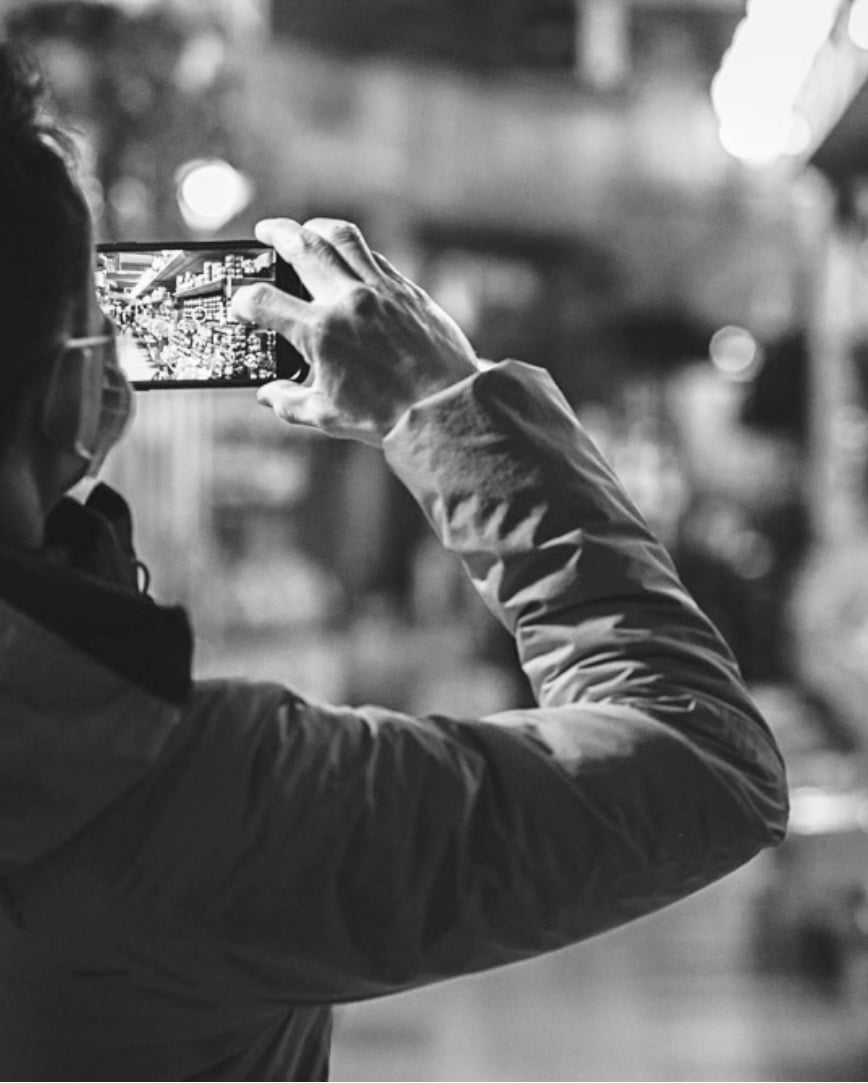 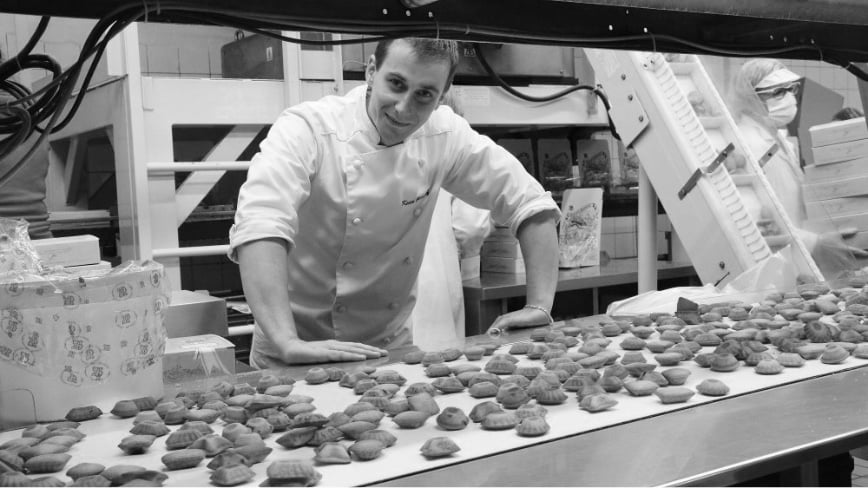 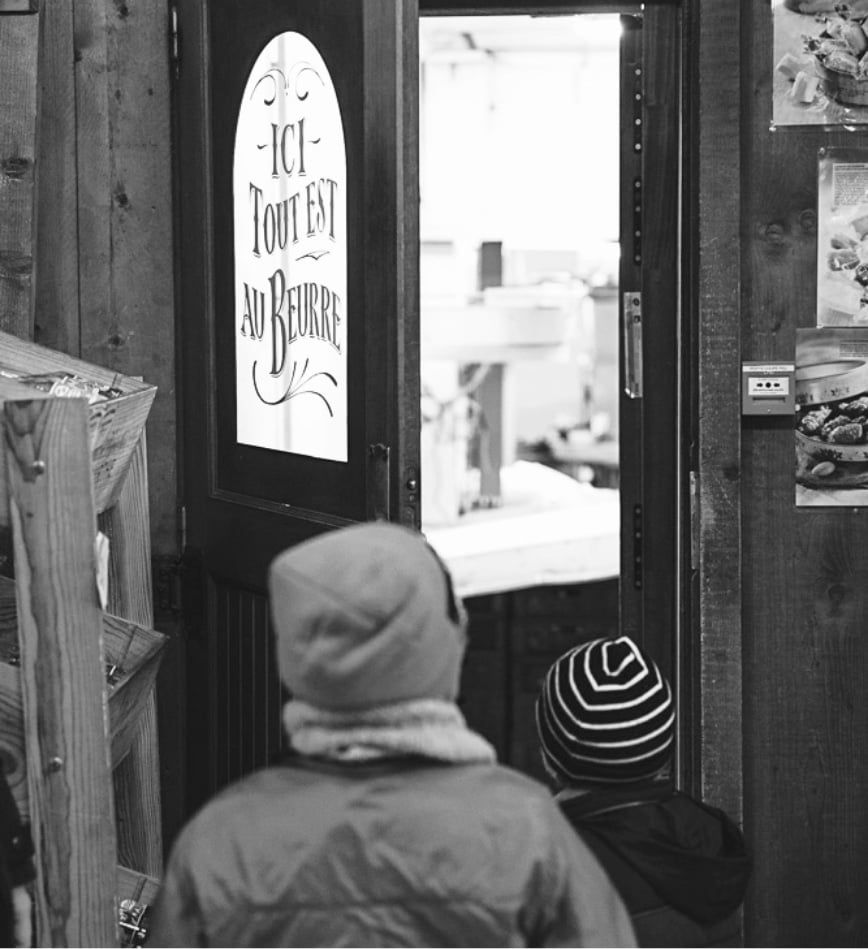 The exciting family saga has been unfolding for over 120 years and in 2020, Kévin began a new chapter: expanding the factory which had become to small to sate the appetites of the increasing numbers of food lovers coming to experience the magic of Burnouf biscuits.

The exciting family saga has been unfolding for over 120 years and in 2020, Kévin began a new chapter: expanding the factory which had become to small to sate the appetites of the increasing numbers of food lovers coming to experience the magic of Burnouf biscuits.

The markets of Yves